Ōkami Wiki
Register
Don't have an account?
Sign In
Advertisement
in: Characters in Ōkami, Bosses in Ōkami, Moon Tribe

Moon (formerly)
Nippon
Celestial Plain (before and after Ōkami)

Waka, the gods' gift to man, is here! Bonjour!

Waka is a mysterious character that appears in Ōkami and briefly in Ōkamiden. The guardian of the Moon Cave, leader of the Tao Troopers, and a self-proclaimed prophet, he often interferes with Amaterasu's plans and missions.

Many years ago, a mysterious catastrophe wiped out all lifeforms on the moon. Only three members escaped, one of them is Waka. He boarded the Ark of Yamato, escaping the lunar realm and reached the Celestial Plain. There, the Celestials and the Celestial Brush gods accepted him and he resided at the plain for an untold time. The Ark is also enshrined at the divine realm.

However, one day, disaster struck. Orochi and its legion of demons suddenly came flying across the sea of stars and assaulted the Celestial Plain. Amaterasu and Waka faced the demon together, but their efforts were fruitless, and Waka gave the prophecy "Only the chosen one can defeat Orochi". Following this, Amaterasu dragged the beast down to the mortal realm, and the legend of Orochi began. Waka then evacuated the Celestials into the Ark of Yamato, trying to flee from the destruction of their home. However, not long after setting sail, an endless legion of demons rose from the Ark's depths; they massacred and devoured all the Celestials. The Ark lost its rudder, and plummeted down to Laochi Lake, releasing the demons. After the tragic event, Waka came hiding in Nippon, apparently from the searching of the demonic legion.

Waka first appears before Amaterasu and Issun in Agata Forest, greeting them in a friendly manner before challenging Amaterasu to a test of strength by fighting her. He notes she is still weak; it seems he has met her before when she was in a stronger form. He challenges her again in Taka Pass continuing to taunt her and tell her about the Serpent Crystal at the Gale Shrine. After she deals with Crimson Helm, he is there to conveniently slip it away, and later he uses it to open the Moon Cave.

Thereafter, he continues to appear periodically to taunt and warn Amaterasu further. Eventually, after the defeat of Lechku & Nechku and the release of the Ark of Yamato from the perpetual ice of Laochi Lake, he entered the Ark, stating that he had waited for this moment for more than two hundred years.[1] Later, when Amaterasu arrived in the control room of the Ark, he is found battling Yami, but to no avail. Then, just moments after, the eclipse of the Day of Darkness completes itself, and Yami awakened. It stripped Amaterasu of her powers and tries to kill her with its laser when she is weakened, but Waka jumped in to protect her. Yami strengthens the laser, and it seems that Waka is decimated, with only his hawk hat remains, but Waka survives, his true identity revealed as a member of the Moon Tribe. He expressed his faith in Amaterasu and encourages her to stand up and battle the evil before them. But then, Yami blasted at Waka, who stands before Amaterasu to protect her, and was blasted off the arena into the darkness below, seemingly to his death. But, after Amaterasu has gained victory over Yami, Waka emerged from the depths of the Ark, alive. He and Amaterasu then departed for the Celestial Plain, restoring peace and harmony to Nippon.

Although he is never directly met in Ōkamiden, Waka briefly appears in a vision when Chibiterasu and Nanami touch the Knowing Jewel in the Sage Shrine. Waka created a clone doll of himself that he intended to serve as a vessel for Akuro. However, he wanted the doll to have a mind of its own and be able to think independently as well as make its own decisions, mostly because he did not want the doll to be directly forced to its fate when the time to be sacrificed as a vessel came.

No matter the situation, Waka never shows any signs of being upset or fearful, a habit that annoys Issun constantly. Also annoying to Amaterasu's companion is Waka's habit of rarely being direct; he prefers vague hints that he calls "prophecies" over straight information. His advice is always helpful, though it is sometimes observed to be so only in hindsight.

Waka also has a great deal of playfulness to his personality; even when he is taking things seriously, he refers to it in a light-hearted manner. This is evident in his prophecies, which usually contain some humorous action or phrase. He often peppers his speech with French expressions of affection, such as "mon amie" and "ma chérie". In the original Japanese version (and every other non-English version), Waka uses English expressions.

Even though Waka mocks Amaterasu many times throughout the course of the game, it is quite clear that he has a great amount of respect and trust for her. It can be said that there is a certain bond between the two, as it was mentioned that they fought Orochi side by side.[2]

Waka appears to be somewhat flashy. He wears a bright pink kimono and purple Sashinuki-hakama, which along with his headdress, consisting of a hawk-head with a long flowing cloak. Beneath his headdress is the long golden hair of the Moon Tribe. He also wears tabi socks and tall rain geta with a single tooth; this would appear to make him easy to knock down, but Waka moves more skillfully than he lets on. He constantly carries a flute with him that is actually the disguised form of his sword Pillow Talk. He also has a second sword in a scabbard at his side, which he uses in conjunction with Pillow Talk.

His appearance echoes that of the Japanese Tengu-bird like mythical beasts that were said to be very skilled in swordplay. His headgear is the shape of a tengu, and also features the typical tengu cap. The geta sandals he wears are actually called "tengu-geta", as tengu were believed to wear geta with one "tooth" in the middle. Waka's clothes are that of a yamabushi (山伏), the mountain ascetics followers of the syncrethic Shugendō creed. In reference to this, tengu are often depicted dressing yamabushi dress.

During his first meeting with Amaterasu, he demonstrated the ability to walk on water. Since the Water Tablet Moon Tribe artifact Amaterasu can purchase from the Emperor grants the same ability, it is possible Waka has a similar device, as he is also a member of the Moon Tribe.

His hat may allow him to fly or glide for short distances. However it is possible that he possesses the ability naturally since Kurow, another member of the Moon Tribe, has the same ability.

Waka is also outstandingly long-lived; he survived Orochi's initial attack on the Celestial Plain, survived the Ark of Yamato genocide, came out of two battles with Amaterasu merely out of breath, and survived being hit by a laser beam by Yami and falling a very long distance to the ground without his helmet. More hints are dropped about the true nature of his power. He controls a set of special troops in Sei'an City for Queen Himiko; one trooper, Abe, has found information that he may be centuries old. He also has enough power to disperse the Cursed zone in North Ryoshima Coast on his own before Amaterasu can get there. He also displays the ability to teleport, apparently limited clairvoyance (although his clairvoyancy may be more powerful than he admits), and can 'phase' through any of Amaterasu's attacks if she tries to attack him outside of the two boss battles.

It is not entire explainable how he restored the Guardian Sapling at North Ryoshima Coast. He may also possesses some Celestial Brush techniques or his close relation with the Celestial Brush gods or simply granted with it.

"This mysterious character is sometimes depicted as a Tao master and sometimes as a loyal disciple.
In any depiction, he always carries his sword, Pillowtalk, and has even raised his blade at Amaterasu.
That battle was won by carefully knocking down Waka's thrown swords."

"Drawings of Waka differ greatly based on the artist and story.
Sometimes young and pretty...Sometimes an old hermit.
No matter the details, the sense of mystery about him is unchanged.
This mystery is what is compelling about him and his many tales.
Of course, people tend to accept Issun's rendition as accurate."

Waka is only fought two times, first in Agata Forest and then in a cave in Taka Pass. He uses the same moves in both fights, although the second time, he has significantly more health and some new attacks.

Waka mostly attacks with his beamsword, Pillow Talk, but also throws his normal sword at Amaterasu if she is too far away. Waka can perform one long strike with his beamsword, a combo of strikes, or will float a short distance above the ground and fly at Amaterasu with his sword outstretched whilst rotating, similarly to a drill. After either the first or second move, he will be briefly stunned and can be more easily attacked. This is also the only time Power Slash (which does considerable damage to him) can be used on him. It is also possible to send Waka's sword right back at him when he throws it, using Power Slash. This will also stun him and leave him vulnerable.

The best strategy is to stay at a distance from Waka, only coming close when necessary, as most of Waka's attacks are close-range and staying at a distance will force him to use his sword throw, which provides an opportunity to stun him. Rosaries are best for this, as they can do a large amount of damage from a distance. A Sub-Reflector Counterattack can also deflect all of Waka's attacks, but the counter drive is not executed. 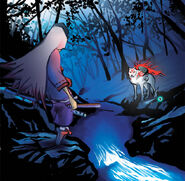 Waka in the end on the Ark Of Yamato.

Waka soon before Amaterasu boards The Ark of Yamato. 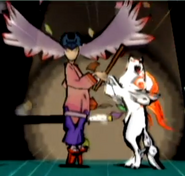 Amaterasu and Waka doing a dance during the "It Takes Two To Tango" Prophecy.

Characters in Ōkami
Community content is available under CC-BY-SA unless otherwise noted.
Advertisement