Mist Warp
Better image needed
An image on this page has quality issues that need to be rectified. Please help the Ōkami Wiki by editing or replacing it with a better version.

Veil of Mist is one of the thirteen Celestial Brush techniques in Ōkami. Granted by Kasugami, this technique boasts the ability of time slowing. When used, Veil of Mist creates a thick mist that enshrouds the environment around Amaterasu and slows time down for a duration of four seconds. This ability is very useful, as Amaterasu can snatch this opportunity to attack demons at their weak points or reveal them, sneak by someone, traverse rapid mechanisms, etc.

To use Veil of Mist, draw the mark = (two horizontal lines). Note that Veil of Mist's effect will only last for four seconds, and if its use overlaps an already lingering mist, the mist's duration will be restarted back to four second.

After Amaterasu acquired an Exorcism Arrow in the garden of the Imperial Palace during the miniature dungeon trip there, she unlocks a small clearing with cracked ground, and after destroying it with a Cherry Bomb, she finds herself in a cave filled with Platform Spiders traversing between alcoves and platforms in the cave. Down at its floor, Amaterasu found a crack on the Emperor's treasure box, and inside, she found a hanging flask. After cutting it down, she entered it, and inside is a thick mist emanating from the sake. Using Galestorm to blow the mist out, Amaterasu successfully summoned Kasugami, and the goddess grants her with Veil of Mist. 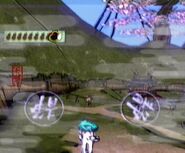 Veil of Mist in action.

Retrieved from "https://okami.fandom.com/wiki/Veil_of_Mist?oldid=50097"
Community content is available under CC-BY-SA unless otherwise noted.