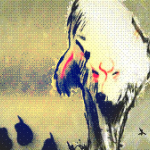 Hello all! Name's Jason and I'm a huge video game fan! I mostly play Ōkami, Monster Hunter, Legend of Zelda, and Metroid, so expect me to edit some pages on those wikis. I also hang around on the Avatar: The Last Airbender Wiki, so you can find me over there as well. I also have a YouTube account, which you can find here. I generally upload videos of whatever I like, though most of it is gameplay that I capture for the hell of it. I posted some of my videos on this page, so feel free to browse. =)

If you wish to contact me privately, do so via Skype. My username is silverwolf457. Send me a friend request first, and inform me you did in advance so I do not accidentally deny it. Sound good? Excellent.

In the event that you didn't read the info at the top of this page, I'll give you a rundown. I was born on New Years Day in 1994. I'm 18 years old. I've lived in Allentown, Pennsylvania my entire life, and I don't plan to change that anytime soon.

My main hobby is, of course, playing video games, which I do almost every day. When I'm not doing that, I'm usually surfing the Internet aimlessly looking for something that interests me. And when I'm not doing that, I'm at work with my second major hobby: writing stories, particularly novels. I'm currently working on a novel in Microsoft Word, which is around 130 pages long so far, and I'm not even halfway done yet. ^_^b I've titled it The Legend of the Pirans, which is kind of like a fanfic of Ōkami--almost. It is its own independent story, however, with different characters, settings, etc., but it borrows a lot of elements from Ōkami, particularly the main protagonist. I am also working on the sequel, titled The Black Wind. I like to think of this one as a mix of Ōkami and Monster Hunter, if that ever happened. The Black Wind is actually going to be two stories in one, and I'll alternate between the two for each chapter. If you want to know more about these stories, go ahead and ask me. I can't answer too much about The Black Wind, though, since it is still in its beginning stage. I already have the ending planned out, however. =)

I graduated from high school in June 2012. I was a near straight-A student, and a member of the National Honor Society. I'm going to attend Lehigh Carbon Community College and Kutztown University for the next four years as a major in English and minor in Creative Writing. I want to be a video game script writer, writing the various plots in some of my favorite genres, most notably RPGs and action adventures. If I was able to write the plots for future Legend of Zelda or Ōkami games, I'd be at my dream job. =) Although I know that's very likely wishful thinking. xP But hey, a guy can dream, right?

And that's all you need to know about me. Overall, I'm a friendly guy and can get along with almost everyone, so drop by and say hi every once in awhile. ^_^

Retrieved from "https://okami.fandom.com/wiki/User:Tyrant457?oldid=43133"
Community content is available under CC-BY-SA unless otherwise noted.