Urashima is always out fishin' on his own. He must be lonely without any friends, poor thing.

Urashima is a resident of North Ryoshima Coast. According to his wife, Urashima is always out fishing on his own and has no friends.[1]

Many years ago Urashima nearly drowned but was saved and taken in by the Dragonians. They took Urashima to the Dragon Palace where he stayed for many years. His age was stored in the Treasure Box said to once every hundred years. Eventually he returned home to his wife, Mrs Urashima, but found that everyone he knew was growing older while he retained his youth. He tried to return to the Dragon Palace without success.

A little after being rejected by Orca, whom Urashima thought was taking him back to the Dragon Palace, he can be found on the shore nearby, looking rather depressed. If Amaterasu talks to him, he will tell her that he realizes that he wasn't worthy of going to the palace, after all. Later on, he'll be at the same place where the bullies were picking on him, but this time, they're asking for his forgiveness. They now acknowledge that Urashima was telling the truth about Orca.

After Amaterasu retrieves the Dragon Orb, she can restore the area where the Water Dragon once was, which will give her the Treasure Box. She must take the box to Urashima, most likely after defeating Ninetails, and restore his true age. The box will immediately age him, making him old. Both he and his wife will give Amaterasu praise for helping him. Urashima can then be found at his usual spot on the shore, the bullies running around him asking him to play with them. 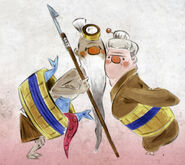 Urashima and his wife.

The children who bullied Urashima.

Add a photo to this gallery