May the fresh scent of flowers protect you always!

Sakuya is the tree spirit found in the Konohana tree planted in Kamiki Village. She summons the goddess Amaterasu to save Nippon once again after it falls into darkness.

Once the world had gone dark after Susano pulls Tsukuyomi from the Moon Cave, Sakuya appears. She quickly summons the goddess Ōkami Amaterasu from the statue of Shiranui. Amaterasu then explores the River of the Heavens, regaining some of her lost abilities, and eventually slashes the fruit down from the Konohana tree to save Kamiki Village. Afterwards, Sakuya informs her of the Guardian Saplings found all across Nippon, and asks Amaterasu to restore them to their natural beauty to strengthen her power.

Sakuya is seen in brief intervals, never really providing too much information, until she is seen after Mr. Orange performs the Konohana Shuffle. Sakuya appears, rejuvenated and intoxicated, and gives Amaterasu praise. She is seen again at the Kamiki Festival, outside the Konohana tree after Orochi is vanquished thanks to Amaterasu and Susano. She appears yet again when Amaterasu goes through the Spirit Gate in Yoshpet, as a young Wood Sprite "Shakuya". Her young appearance is parallel to the a tiny sapling that is Konohana itself. Sakuya is also seen at the end of the game, holding Issun as he becomes the new Celestial Envoy.

Sakuya makes an appearance in the sequel when Chibiterasu and Issun make their way to Kamiki Village, finding that Shinshu Field has been cursed along the way. When they first arrive at the Konohana tree, Sakuya mistakes Chibiterasu for his mother, and is told by Issun that the wolf before her is actually Amaterasu's son. She immediately takes a liking to Chibiterasu, and the pup starts playing with her, completely ignoring Issun's order to "give her a good bite". At this time Sakuya's tree is struck by lightning and split in half, and she is wounded, her powers weakening dramatically. Issun tries to use Rejuvenation to repair the damage, but is unable to. Chibiterasu then barks at the stars, sad about Sakuya, when a constellation is revealed. Using the Celestial Brush, Chibiterasu manages to conjure the children of Yomigami, who granted Chibiterasu the power of Rejuvenation. He uses this power to repair Konohana, restoring some of her power. Later, Chibiterasu and Kuni encounter a young girl crying for her mother's stolen mirror, and once the team manages to bring it back to her, she reveals herself as Sakuya, explaining to them she only wanted to test the duo's skills and that she apologizes for the hassle. Blooming Sakuya's Guardian Saplings is again an important part of gameplay. Near the end of his journey, Chibiterasu travels 100 years into the past. He blooms her sapling in the same area in Kamiki Village and as he does so, he encounters the young version of Sakuya, whom when asked, will call herself Shakuya.

Sakuya, despite being more than 100 years old, looks like a rather young woman. She is fairly tall, and accompanied by a purple aura. Early in the game, she wears a pink kimono with peach shaped cutouts that reveal the top of her chest, her back and her rear. She also wears a thin purple wrap that floats around her and appears to be made of mist. Once the sacred tree of Konohana is rejuvenated, she wears a leaf-like "bikini" and pale pink skirt.

Young "Shakuya" wears an attire almost identical to her older counterpart's, but is much smaller and chubbier, due to being a child. One thing that has remained the same about Sakuya, old and young, is her hair style: her long black hair is tied at the back with two strands parting to the sides at the front of her face, her purple earrings, and the two pairs of leaves that cover her breasts and the other pair found in her hair.

Sakuya is at least 100 years old, proven when visiting her village 100 years ago. At a young age, she used to have a lisp and would pronounce her name as Shakuya, a trait she seems to have outgrown. She is very smart, and has a strong influence over all of Nippon, although admittedly her power has diminished over the years due to the fact that she spent most of her time protecting one given area. Once she feels the darkness of Orochi spread across, she uses quick wits to summon Amaterasu back to life. 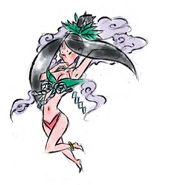 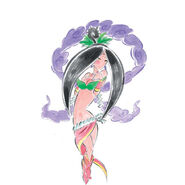 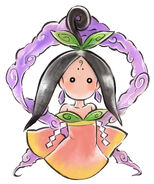 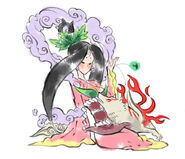 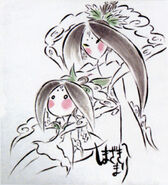 Sakuya with her younger self.

A portrait of Sakuya, drawn by Ishaku

The naked Sakuya design that never made it into the game.

Coloured design sketches of Sakuya.
Add a photo to this gallery