The Rosary (「勾玉」?; Magatama; Curved jewels) is a class of Divine Instrument that Amaterasu and Chibiterasu can obtain. When equipped, a Rosary appears as a string of magatama beads circling their neck; when used, it whips out a long chain of holy energy, slicing and quickly eradicating the forces of evil in Nippon.

The Rosary is the longest and fastest weapon in Ōkami. To attack, press the Square button or swing the Wii Remote quickly but consistently. Amaterasu will lash out with the Rosary, which slows slightly upon contacting a foe and delivers many hits very rapidly. The range of the lash varies upon the Rosary equipped.

The damage of an individual Rosary strike is a fraction of either the Reflector's or the Glaive's, but the overall damage potential is approximately the same because of the rapid attack rate. In fact, the attack rate means that Rosaries can do even more damage than Reflectors or Glaives if used correctly. The Rosary is usually single targeted, but when large swarms of enemies surround Amaterasu (such as in the Devil gate trial caves), the Rosary may hit more enemies simultaneously in the manner of an area-effect attack. Attacks can be made at any time, but swings while in the air tend to be weaker and less consistent.

The Rosary has a 4-swing combo when first acquired. During each swing, consistent and firm "mashing" of the Square key, shaking of the Wii Remote, or holding Y on the Switch controller will yield many hits in each. Lessons from Onigiri-Sensei at his dojo can allow Amaterasu to make a lengthy 6 or 8-swing combo.

Rosaries may disrupt the usage of the Celestial Brush to perform Floral Finishers, as the Rosaries' high attack speed can easily overkill a dying demon, thus disables the chance to acquire Demon Fangs. Using combo-halting techniques such as the Sub-Reflector Counterattack, Fleetfoot, or even jumping can stop combos and allow required strokes to be performed without overkilling the target.

Take note that the Wii version of the game does not allow combos to be stopped in this way, but if the Wii Remote is stopped from swinging as Amaterasu delivers the final hit, she should finish the swing without overkilling the dying demon. The Switch version is similar to the Wii version in this regard, making it very easy to overkill demons since one only needs to hold the Y button down to attack repeatedly.

When a Rosary is equipped as a Sub weapon, it becomes a long-ranged projectile attack. This is more useful to Reflector and Glaive users, as they have a much shorter reach than Rosaries. The Devout Beads, Exorcism Beads and Tundra Beads produce a rapid-fire, submachine gun-like 'bullet' attack which delivers a volley of shards and then 'reloads' over a short time. The Sub Rosary may appear as a series of objects on either side of her Main weapon and be visible in different numbers depending on the projectiles remaining in the volley. When a Rosary is used as a sub weapon, and a glaive is used as the main weapon, the Rosary can be seen hanging off the side of the glaive or Amaterasu. If the dojo technique Bead String is used, then the Sub-Rosaries can fire indefinitely without reloading, when a Rosary is also equipped as the main Divine Instrument.

Other type of Sub-Rosaries are the Life Beads and the Resurrection Beads, the second and forth-tier Rosaries. Their main attacks are identical in style to those of other Rosaries, but their Sub attacks are quite different. Instead of a submachine gun-like release of bullets, they release a spray of all the beads in one shot, like a shotgun. When fired at close range, all the beads can hit a single enemy, dealing lots of damage quickly. It also heavily disrupts enemies' attack sequences, especially those with stunned animations, such as Bud Ogres. The projectiles, although fired in a wide spread, are also enough to cause flying enemies such as the Ubume to reveal their weaknesses or fall to ground. Unfortunately, it is unlikely that more than one will hit a single enemy from far away, and this kind of attack also has a longer reload time than other Rosaries and cannot be used rapid-fire, since all the beads in the Rosary will be used for one of these shots, so the Life Beads and Resurrection Beads are less effective than the other Sub-Rosaries when fighting at a longer range.

With grounded use, the Devout Beads, Exorcism Beads and Tundra Beads are best for the Sub-Rosary position, due to their rapid firing rate and low reload time. Airborne, the Life Beads and Resurrection Beads are better as Sub-Rosaries instead, because in the air, the other three variations of the Rosary has a decreased firing rate, with maximum of three shots only. The Life Beads and Resurrection Beads, on the other hand, can fire all their beads at once, and can make two discharges of the beads.

The Wii version of the game has slightly different controls for using Sub-Rosaries' attacks. To fire a single shot press Z, and to continue firing instead press C repeatedly if the Rosary has rapid-fire capabilities.

The Rosary, with its long range and projectile Sub, is a good counter for both flying foes and grounded enemies. It is arguably the best generator of Godhood, invaluable for many parts of the game, and is the favorite of many Ōkami players for its versatility and killing speed. The Devout Beads can be found near the Guardian Sapling of Agata Forest. The Tundra Beads are the final and most powerful Rosary. It harnesses the power of ice and can be used as an ice source for Blizzard.

The ghostly spiral shape of the Resurrection Beads is the common depiction of souls in Japanese culture, and is also a reference to the onibi (鬼火), a similar phenomenon to the will-o'-the-wisp. The Tundra Beads' original Japanese is the same as the jewel Yasakani no Magatama's (「八尺瓊曲玉」?), one of the three sacred objects of the Imperial Regalia of Japan.

As with Solar Flare and Thunder Edge, Tundra Beads does not carry over to a New Game+. 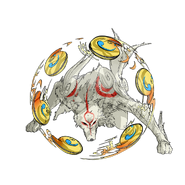 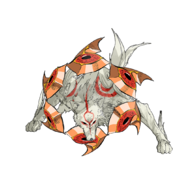 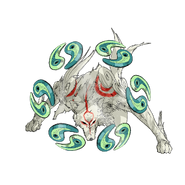 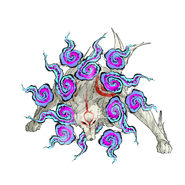 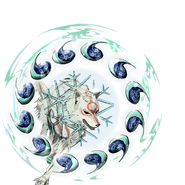 In Ōkamiden, Chibiterasu also obtains a Rosary-however, the most notable change from the system in Ōkami is that the Rosary must be upgraded by a blacksmith to increase in power. The available Rosary upgrades increase through giving him Lucky Coins, and the upgrades must be purchased through the exchange of Demon Bones, Skins, and Livers obtained through Floral Finishers. Unlike in Ōkami, only one Rosary can be available to equip at a time-and once upgraded, the lower-tiered Rosary cannot be re-acquired; additionally, upgrading the Rosary will only raise its attack power, but not amount of combo hits. Even so, one single hit can be comprised from many smaller, continuous strikes, the number of which is determined by the rate at which the attack key is pressed. 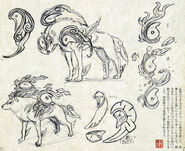 A Rosary that did not make it into the final game.