The Reflector is Amaterasu's and Chibiterasu's first Divine Instrument class. The base forms are the very first weapon, given to them at the beginning by default.

Solar Flare was the Divine Instrument Amaterasu used in the past when she was at the peak of her power (going by the name of Shiranui). However, when Amaterasu died, she lost her Celestial Brush techniques and this Reflector with them. When she was reborn, she was instead given the Divine Retribution Reflector by Sakuya and had to track down her techniques again.

Amaterasu eventually found all the Brush Techniques. As she collected the last one in Wawku Shrine, the Celestial Brush gods she had met on her journey appeared before her and granted her this Reflector again.

The Reflector is one of the simplest weapons to use; simply move into the vicinity of a demon and press Square (or swing the Wii Remote). This attack is of average damage, speed and range, making it the ideal all-round weapon and an excellent choice for beginners to Ōkami, as well as experts. As with most weapons, attacks can be made effectively with the Reflector from the air. Amaterasu will stay in the air for a few strikes before returning to the ground; this can be useful for dodging some grounded enemies. While airborne, the Reflector is swung by a quick somersault, resulting in a forward swing. This is ideal against both flying and land-based foes. The Reflector can hit multiple opponents that are bunched tightly.

At first, Amaterasu uses a flowing 3-hit combo. This combo can be extended via Dōjō techniques to 4 or 5 hits, each becoming more damaging and effective.

When used as a Sub weapon, the Reflector is an ideal melee companion; it executes the Sub-Reflector Counterattack, which it acts as a shield, held in front of Amaterasu for a short time. This will block incoming attacks if struck while it is active. In the case of rapid-fire attacks, Amaterasu will maintain the shield until the barrage ceases. Using this Sub technique breaks all combos Amaterasu might have been performing. This can be disruptive, but is useful when foes attack unexpectedly. The Reflector will block every attack, so be sure to make use of this versatile capability!

Additionally, when Amaterasu successfully blocks a direct physical attack with proper timing, she will launch into the air along with the the victim and spiral back down to the earth with twins tails of energy in slowed-down time before forcefully slamming it down into the ground. This hidden move is called Izuna Otoshi (「飯綱落とし」?; Idzuna otoshi; Fox spirit slam). Foes hurled by this piledriver counterattack may release a Demon Fang, but only one per demon. If a green bagua appears on the screen after blocking a physical attack, that is a sign that a Demon Fang has been released, and Amaterasu will recover a slight amount of solar energy. This piledriver is the most powerful of weapon attacks, and interrupts the demon's attack sequences. Some enemies may even be killed outright with this counterattack. Bosses and overly large or strong enemies are immune to the full-on body slam, but may still release a demon fang if the bagua appears after blocking one of their attacks. It is also noteworthy that ranged attacks will not be parried this way.

To use a Reflector to its full potential, proper timing to block must be learnt in order to correctly execute the Sub-Reflector Counterattack. Equipping two Reflectors after learning Wailing Mirror will increase the time during which to block, in addition to giving a power boost. As a bonus, each time a Reflector blocks an attack, a Demon Fang will always be dropped, along with the aforementioned bagua appearing. Once again, it is restricted to one per demon.

Divine Retribution is first given by Sakuya to Amaterasu when having taken on the form of the wolf statue in Kamiki Village. More are found on her adventure around Nippon. They have the appearance of a spinning disc hovering on Amaterasu's back. When swung, it is slammed forcefully into foes with a savage howl. In some larger cinematics, the Divine Retribution is shown as Amaterasu's main weapon, whether or not it is equipped. Overall, apart from the Snarling Beast and Solar Flare, most Reflectors are functionally the same, differing only in aesthetics and damage. They are an excellent all-round weapon, able to counter almost any foul threat efficiently.

Concept art of Reflectors shows that Infinity Judge was originally designed to be able to throw foes with the fragments to surround and grab the targets.

The flames projected by the Solar Flare can be used for Inferno, effectively phasing out the need for torches or other sources of fire, such as Fireburst.

As with Tundra Beads and Thunder Edge, Solar Flare does not carry over to a New Game+. 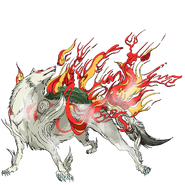 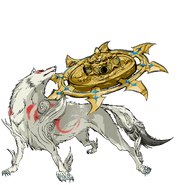 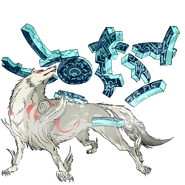 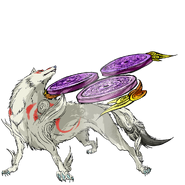 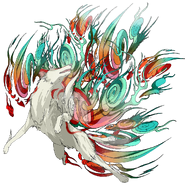 In Ōkamiden, Chibiterasu also has a Reflector- however, the most notable change from the system in Ōkami is that the Reflector must be upgraded by a blacksmith to increase in power. The available Reflector upgrades increase through giving him Lucky Coins, and the upgrades must be purchased through the exchange of Demon Bones, Skins, and Livers obtained through Floral Finishers. Unlike in Ōkami, only one Reflector can be available to equip at a time- and once upgraded, the previous Reflector cannot be reacquired.