Tsumugari
Orochi is a major demon of Ōkami and Ōkamiden. It is an eight-headed serpent demon that resides in the Moon Cave.

Orochi is a eight headed demonic serpent of massive size. On Orochi's back is a shrine surrounded by a garden with a giant temple bell hanging in it on a large stone pedestal. Underneath the pedestal is a mass of writhing tails, entwined, and at the sides of the mass, sprout eight necks the size of tree trunks, and on the end of each neck is a head, wearing a samurai helmet with thick armor plating and armed with a gaping mouth covered in vicious teeth, and on the outside is lined with barbs pointing outward. Each head of Orochi has an element, clockwise: fire, earth, poison, light, lightning, water, wind, darkness. The samurai helmet of each head bears the emblem of its element and the element's kanji: fire has the emblem of a raging flame; earth has a large mountain emblem on its helmet; poison has a purple skull and crossbones; light has a circle, with shining rays projecting from it; lightning has a lightning bolt, with the kanji on the middle of the bolt; water has the emblem of a water drop; wind's has the symbol of a whirlwind, which is a circle and two spirals sprouting from it; and darkness has its emblem of a crescent moon in complete black.

Orochi presumably originated from the Ark of Yamato. More than 200 years prior to the events of Ōkami, it attacked the Celestial Plain (causing all the Celestials to flee in the Ark of Yamato with Waka, which would inadvertently lead to their demise during the Ark of Yamato genocide). Following the advice of Waka, Amaterasu dragged Orochi down to the mortal plain, waiting for a person of a legendary bloodline who could defeat Orochi. Orochi settled in the Moon Cave and terrorized the inhabitants of Kamiki Village, selecting a young maiden as a sacrifice every year. Amaterasu was wrongly believed to be Orochi's familiar and given the name Shiranui. Eventually the person of the legendary bloodline, Nagi, was born. Although he antagonized Amaterasu at first, he teamed up with her to defeat Orochi after his beloved, Nami, was chosen to be the sacrifice, as the legend says. Shiranui died during the battle (although it was later revealed by Amaterasu after her journey through the Spirit Gate that many details of the legend were untrue and Shiranui actually died of wounds inflicted by Lechku & Nechku during the battle atop Wawku Shrine; during the fight with Orochi, the goddess was already on the verge of death).

A century later, Orochi returned after Nagi's descendant, Susano, accidentally removed the sword Tsukuyomi that was binding it. However, Orochi was not at his full power, and needed a blood pact with Susano in order regain his former strength. He also consumed Tsukuyomi to prevent anyone from sealing him again. Although Orochi tried to convince Susano to submit to him, Susano's courage and determination shone through, and he and Amaterasu defeated the beast. This only began the next stage of his plan, however, since Orochi released several other demons that also originated on the Ark of Yamato into Nippon. Orochi's corpse released the reborn form of Tsukuyomi, the Divine Instrument Tsumugari, after his death. Orochi's true form would later be encountered through the Spirit Gate and on the Ark of Yamato.

"Serpent banished 100 years ago by Shiranui and Nagi. Each head has an
elemental power: earth, wind, fire, water, thunder, poison, light
and darkness. The bell on its back tolls 108 times—one for
each desire of its sacrifice. Legend has it that avoiding attack
and making it drink 8 Purification Sake when angered was Nagi's
technique. The water head is angered by attacking while bathing.
Thunder is angered by losing sight of its target.
Poison and wind attacks can be countered with wind. This was Nagi's strategy."

"A giant snake imprisoned 100 years ago by Nagi and Shiranui.
Its 8 heads are Fire, Darkness, Wind, Water, Lightning, Light, Poison and Earth.
The great bell on its back can manipulate the soul of an offered sacrifice.
Nagi was able to intoxicate each head with the help of the 8 Purification Sake.
When Orochi fought back with water, the water was repelled.
Then when it sought to use lightning, it lost track of Nagi.
Finally, when Nagi went to slay the beast, he was mysteriously
protected from the poison and wind by a divine wind of unknown origin."

When the battle begins, Orochi will be protected by a barrier, making him impervious to all attacks. However, the 8 Purification Sake is not present at that time. Attack Orochi once to provoke the cutscene and the sake will be ready. Then Amaterasu must force the 8 Purification Sake in the moat into Orochi's mouth via Waterspout. This can only be done while Orochi is roaring, which will occur when an individual head's attack is countered. After two doses of sake are delivered to each of any three heads, the rest of Orochi's heads will succumb and fall unconscious to the floor. Amaterasu can then climb up his neck to the bell on his back. Destroying the bell will dispel the barrier protecting Orochi, leaving him open to attack. After the bell is destroyed, Orochi's back will burst into flames, giving Amaterasu a source for Inferno, if she needs to use it. Amaterasu must counter the attacks (see below) and force the sake into his mouth once more to stun him long enough and unleash a barrage of strikes with her Divine Instrument and Celestial Brush. Inferno is effective against all heads except the fire head, and deals large amounts of damage; Power Slash deals less damage, but is effective against all heads. Also, after the bell is destroyed, Orochi will begin to use the non-elemental bite attack. Use a Sub-Reflector counterattack to gain a Demon Fang from the attack, which can be done once on each head. Attacking a head before using Waterspout will cause it to go into a frenzy, which then it will begin to swing and smash around with its head wildly. A Sub-Reflector defensive move will negate a hit, but Amaterasu must block five consecutive attacks. Beware of the burning falling debris, also. If Amaterasu stands on one spot for too long (especially when she is firing her Sub-Rosaries), a rock will fall down directly to that spot. Evade or use the Fire Tablet to negate the damage. Repeating this for the other seven heads will defeat Orochi. Following the actual battle, Amaterasu must use Crescent in order to strengthen Susano's sword, who will then attempt to slice off Orochi's heads. Amaterasu must then use Power Slash to assist him.

During the fight, each head will attack using a different element. Different evasive maneuvers must be performed in order to counter each attack. For the Fire, Wind, and Poison heads, Amaterasu can use Galestorm to blow away the flames, whirlwinds, and poisonous clouds, respectively. However, if Amaterasu is battling True Orochi beyond the Spirit Gate or on the Ark of Yamato, she can use the Fire Tablet to be immune to the Fire head's breath. For the Darkness head, Amaterasu must use Bloom to open up the cursed Giant Buds before they release a temporary cursed zone into the area. Doing so will release multiple Ink Pots for Amaterasu. For the Lightning, Light and Earth heads, Amaterasu must jump to dodge the lightning spheres, laser beams and quakes, respectively. For the Water head, Amaterasu can stay on the platform furthest from the head, jump onto the lily pads that appear once the head floods the arena to reach it, or use the Water Tablet to run straight across the water's surface. She must quickly attack the head before it releases eel-like creatures that can damage her. Striking the head will drain the water and cause it to roar, leaving it open for Waterspout. 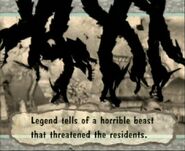 Orochi's silhouette in the introduction and prologue.

Concept art for each Orochi's heads in the Ōkami Official Complete Works.

Concept art of Orochi in the Ōkami Official Complete Works.