I shall not lose faith! I'm not afraid to face Orochi in the Moon Cave.

Nami was the sake brewer of Kamiki Village 100 years ago, and also Nagi's love interest. She is the chosen maiden whose house was marked by Orochi as a sacrifice, although Nagi defeated him and freed the village and all of Nippon from his rule, ruling her over.

When Amaterasu and Issun went through the Spirit Gate, they encountered Nami and saw her chosen as the sacrifice. However, since they accidentally knocked out Nagi earlier, they had to dress him up as Nami by stealing her sacrificial robe while she was bathing. Amaterasu had to tread very slowly and carefully, otherwise Nami would spot her and summon help. After stealing the robe, they put it on the unconscious Nagi and took him to the Moon Cave, where they defeated Orochi. Nami herself was not seen for the rest of the journey beyond the Spirit Gate, but Nagi wears her outfit for the rest of the fight against Orochi.

Nami was encountered again in Ōkamiden as Chibiterasu and Kurow followed Akuro into the past to stop him from bathing in Orochi's blood. 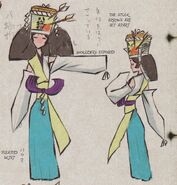