He's a little rascal, my son. But he's an adorable kid, really. And they say adorable kids need a good thumpin' from time to time!

Mushi is a young boy who lives in Kamiki Village with his mother and pet dog Hayabusa. He is often seen carrying a pet dragonfly on a string.

Amaterasu first met Mushi when she entered Kamiki Village at the beginning of her journey. He was surprised at the sight of a white wolf and thought she looked weak. Mushi told Amaterasu about his mother's turnip field. According to Mushi, the field had ten turnips and his dog, Hayabusa, had managed to dig up nine in a row without getting hit by his mother. Mushi said that if Amaterasu managed to dig up all ten without his mother hitting her, then he would admit that she was the better canine. Mushi stayed true to his word when Amaterasu returned with the Oddly Shaped Turnip that he and Hayabusa had been looking for. He declared Amaterasu the "king of hole digging" and subsequently gave her praise.

When the Kamiki Festival drew nearer, Hayabusa stopped listening to Mushi and sat still all day and night outside his house, not listen to Mushi at all. Mushi became angry with Hayabusa, to the point of declaring that he does not need such a disobedient dog.[1]

After Amaterasu and Issun learned that Hayabusa is one of the Eight Canine Warriors, Hayabusa told them that he is not the real Hayabusa, who died protecting Mushi's father when they were attacked by monsters deep in the forest, which then the Canine Warrior Chu happened to pass by. Before Hayabusa died, he begged Chu to protect Mushi, foretelling the coming of an evil arrow from the sky, which would kill Mushi on the night of the full moon. Chu came to Kamiki Village and adopted the identity of Hayabusa, with nobody noticing due to their same breed. Chu felt it was his duty to fulfill Hayabusa's dying wish and protect Mushi, despite the boy had no idea that Hayabusa was acting differently because his life was in danger and continued directing his anger towards the dog.

On the night of the festival, Amaterasu found the villagers outside Susano's house. Mushi told Issun that Susano drank all the sacred sake brewed by Kushi and was hiding in his house. While Susano was telling the villagers that he had removed Tsukuyomi and revived Orochi, a roar came from the Moon Cave, and an arrow materialized, darting towards the village mere moments later. The arrow headed straight for Mushi, but Hayabusa pulled his master out of the way just in time. Mushi finally understood his dog's recent behavior and apologized for treating him badly.

Once the threat of Orochi had passed, the villagers celebrated the newfound peace in the village's annual festival. Mushi was seen playing with Kokari and the boys' dogs. He told Amaterasu that he and Hayabusa will be best friends forever, adding that he knew all along that Chu was not the real Hayabusa, because the real Hayabusa never would have let his father die alone, but instead stand up until the end against the monsters. He and Chu went back to trying to break Amaterasu's turnip digging record, but in reality, Mushi also had a new goal in mind: becoming a hero who would protect the weak just like Hayabusa, and according to Chu, his dream will come true some day.

In the climax of the battle against Yami for the fate of Nippon, Mushi learned that Amaterasu is the sun goddess, and together with the rest of the country's people, prayed for her victory in the fight, giving the goddess the power to put an end to the Dark Lord.

Mushi is a mischievous little boy who spends all his time with his dog, Hayabusa. He holds great confidence in both himself and his dog and believes that with enough hard work, the two can achieve anything. He enjoys trying to dig up his mother's turnips despite his fear of being hit by her. Mushi is humble in defeat as he readily admits that Amaterasu is the better canine after she beats Hayabusa's turnip digging record. His closeness with Hayabusa can also cause him to become quite upset if he feels Hayabusa is not listening to him.

Mushi is a small boy who always carries a a dragonfly on the end of a string. He wears a one piece, blue outfit, fastened by a string at the waist. He has a large red, round nose and rosy red cheeks. He has small, round eyebrows that resemble the basic shape of a tomoe, a Japanese shape that resembles a comma. His hair is spiked straight up at the top and tied into buns on each side of the back of his head. 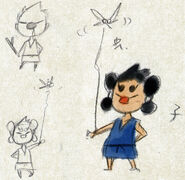 Artwork showing Mushi as an adult. 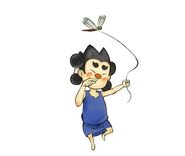 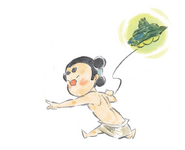