Heh heh... I'm pretending to be a demon hunter. It's a game where you defeat monsters from Oni Island. But it's all just pretend. I'd be too scared to do it in real life.

Momotaro is a little boy in Sei'an City. He appears in both Ōkami and Ōkamiden. Momotaro looks like a small monkey. He wears a white headband and carries a flag on his back. He has a purple undershirt, with a red shirt and a pink vest coming over both. He also adorns a small sword on his waist. Momotaro is a childish little boy who likes to pretend he is a warrior who fights fearsome beasts from Oni Island.

Momotaro wants to play with Amaterasu and asks her if she wants to be his loyal servant. He offers Amaterasu millet dumplings in exchange, but realizes that they were stolen by Hayazo. Once Amaterasu has retrieved the millet dumplings, Momotaro gives them to her whenever they speak.

Momotaro at first mistook Chibiterasu for Amaterasu, but noticed their height difference. At first he wanted to play with Chibiterasu, but decided not to upon noticing Chibiterasu's partner. After Chibiterasu and Kagu team-up for the second time, upon speaking with Momotaro, he will move to Yakushi Village, but only if the dog and bird in Ryoshima Coast, the puppy in Shinshu Field and the monkey in Hana Valley have been invited. He is found on the top floor where all the other animals are staying. He will then speak with the player on a matter conscerning his Kibi Dango candy, where he will ask the player to collect and bring them from Shinshu Field and Hana Valley in order to obtain more Praise. 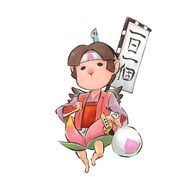 Artwork of Momotaro from Ōkamiden.