Galestorm, Power Slash
King Fury is a demonic being who was brought back to life by Akuro. In the past, he was betrayed by the people he aimed to help and sought revenge upon mankind. It is revealed that he was a member of the Moon Tribe and his real name is Sugawara. He is first seen in Sei'an City taking Kagu to the Underground Ruins for her miko powers.

"A city politician who worked for the sake of the people, but was
brought down by political in-fighting. He never recovered from his betrayal,
and died of grief and full of resentment. His anger brought
forth a spirit that only sought revenge."

King Fury attacks with long range and speedy moves. He will occasionally be seen hovering the battle arena charging for an ultimate attack or he will be on ground level charging and Chibiterasu can use Power Slash on him. He must guide Kurow to him (only when King Fury is hovering in the air and charging for his ultimate attack), where he will suck out all of King Fury's power with his amulet, thus causing him to fall down to earth and become stunned for a while. Galestorm will be needed to stop King Fury in summoning thunderstorms or electricity, as well as blow him away from Kurow when he is working on deactivating Daidarabotchi. Ocassionally the robot may attack Kurow with a sweep of its hand, but Chibiterasu can avoid this by taking Kurow on his back and moving out of the hands reach and dumping Kurow back to his original spot on the computer. King Fury will also send slips of evil energy at Chibiterasu that can be easily deflected by using powerslash on them. When King Fury has received a certain amount of damage, he will then duplicate himself and there will be two for Chibiterasu to deal with. 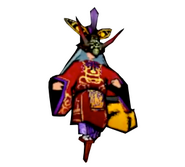 King Fury as he appears in-game.