Use sources of fire to set targets aflame

Playhouse
Better image needed
An image on this page has quality issues that need to be rectified. Please help the Ōkami Wiki by editing or replacing it with a better version.

With the Celestial Brush, Amaterasu and Chibiterasu can use fire from an existing fire source to burn NPCs, melt ice and incinerate demons. With NPCs, they will be rendered black and smoking (similar to Thunderstorm being used on them). With ice, this frozen substance will obviously be melted, partly evaporating into steam, while the rest diminishes into water. With demons, they will be damaged considerably and rendered as black. For demons of the ice element, they will receive more damage and had their ice defense penetrated. Inferno can also be used to light torches.

During Amaterasu's exploration in the lower sections of the Moon Cave, she rode an elevator down a deep pit with the bottom being a pool of poison. On the side of the pit is a tunnel leading to a large cave with a door guarded by four eyeball lanterns. After solving this problem, the door opened and in the next chamber, is the frozen statue of a phoenix. It turns out that a vicious demon has froze the statue and sealed Moegami away. The demon is fought, and with its destruction, Moegami is released from the perpetual dark ice. He then granted Amaterasu with Inferno.

After teaming up with Kagu, Chibiterasu and went to explore the Playhouse under her guide. In one of the rooms in the building's basement, the statue of Moegami is found, and Ko-Moegami grants the young sun god Inferno.

In both Ōkami and Ōkamiden, Fireburst is Inferno's elemental upgrade. It allows Amaterasu and Chibiterasu to create a massive sphere of sacred fire on demand, incinerating all that are within its reaches. 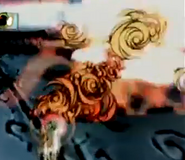