In Ōkamiden, the Imps reappear with different designs and battle tactics. Some "traditional" Imps appear when Chibiterasu goes to the past with Kurow.

Imps are followers of Orochi and are seen as cheeky and monkey-like musicians. For the most common types of Imps listed below, their masks display characters of the first line of the archaic Iroha poetic sequence, albeit in katakana:

Two more merchant imps appear in two later dungeons: Oni Island and Wawku Shrine. Without her paper mask, they instantly recognize her as the sun god and make a short speech about being unafraid and willing to do battle, a "battle" consisting of normal sales interactions. Since Oni Island is a single-tour dungeons, it's unknown what became of the imp there afterward or if it was destroyed with Oni Island, although the Ōkami Official Complete Works shows an image of most of the game's merchants having a banquet together.

The imps make one final appearance during the end credits when Amaterasu strolls by a benign band of imp musicians partying (mimicking the group of imps in Hana Valley during the game).

"They all started out looking much more distinct and unique, but settled into these current apearances through the effects of development. Personally, I though the Black imp's appearance in the image scroll was very powerful. I remember thinking how unexpected the motions applied by Utsunomiya were to me.

This was the very first demon I designed. Physically, I based him on a monkey, and I have emotional stock in this guy since he and I went through a lot of trial and error together as my first demon. I tried to bring the influences from the Blue Demon depicted in the image scrolls from the Pearl Hermitage Archive of Daitokuji in Kyoto, since it was my first demon and I wanted a smooth transition for him." [Sawaki]

Green imps are the first kind of Imp found in Ōkami. They are first encountered in the River of the Heavens. They are very weak and have little health. They wield flutes and can project them a short distance to attack Amaterasu. They can also attack with slaps. They are more nimble than the other classes but are very easy to dispatch.

In Ōkamiden, they're once again the weakest Imps, but they now attack with a large paddle or can throw fruit-like bombs at Chibiterasu if he is too far away.

Red imps are the second kind of Imp. They are first encountered in Kamiki Village. They are basically the same as the Green imp but instead wield shamisen. They can throw these shamisens at Amaterasu to attack or use the same slap attack as Green imps. If they take enough damage, or if Power Slash is used on them, they will use the lute as a shield to defend themselves and whatever is behind them. The shamisen is invulnerable to all attacks except Power Slash, which must be used to destroy it. The Imp will then be vulnerable. The shamisen can also be destroyed when the Imp throws it by using Power Slash to destroy it in mid-air. Alternatively, once more powerful Divine Instruments or Celestial Brush techniques are obtained, the Imp can be killed before it can raise its shamisen.

In Ōkamiden, they ride on tops and charge around the battlefield. Hitting the Imp enough will stun it and allow the destruction of its top. After that it's much weaker and uses attacks similar to those of the Green imp.

Yellow imps are the third type of Imp encountered. They are first encountered in Hana Valley. They are completely different from all the other classes. They use their drums to drill into the ground, then bring their head, arms and drum up and attack by drumming to produce a shockwave. Use the Celestial Brush to scribble on them as they appear to temporarily blind them and prevent them from burrowing, but they will flail their arms around blindly, so use Sub-Reflector Counterattack to quickly dispatch them. Don't panic if they successfully burrow themselves, as they will resurface after a while. They are only vulnerable when they pop up again; while they are drilling or underground they are invincible. The best solution is to quickly get behind them before they have emerged when they pop up, which will stun them. They can then be hit, which will cause them to completely emerge and either go back underground or use their drum to fire a short-ranged explosion. After they fire the explosion, they will be stunned again, which is another opportunity to attack. If Amaterasu is not behind the Imp when it emerges, blinding the Imp by covering it with ink (by scribbling on it) will also cause it to completely emerge, although it will strike blindly with its hands until it clears the ink. They are invulnerable to Power Slash unless they are stunned, although it will do them significant damage. They have more health than Red imps and Green imps, though, so they will take more time to defeat.

In Ōkamiden, they now wield a kendama toy with a skull attached to it which they can use to fly. They can also fire skulls from the toy to attack or just attack with the kendama. They are difficult to defeat when flying, as their projectiles can only be deflected back at them from the ground. If this is accomplished, however, they become stunned and easy to dispatch.

Blue imps are the fourth kind of Imp encountered. They are first encountered in Kusa Village. They fly around on paper gliders and have only one attack, shooting blue projectiles from a flute in their mouths. They will crash if Power Slash or Galestorm is used on them, making them easier to attack. When they crash, they will get their head caught in the ground and will be immobile while they are trying to free it. However, once free, they will immediately become airborne by producing new kites. Their health is on par with Yellow imps, but they are more vulnerable to attack.

In Ōkamiden they have the ability to burrow underground, instead of flying, and attack with bubbles or with sharp claws on the ends of their fingers. They are able to use different varieties of bubbles to attack: a red bubble is explosive and will damage Chibiterasu if he comes into contact with it. A blue bubble will trap Chibiterasu inside it and will cause him to constantly lose health until he breaks free. Blue imps can be stunned using Cherry Bomb or, if they are using a bubble to float, with Power Slash.

Black imps are the last and most powerful type of Imp. They are first encountered in the Moon Cave's Calcified Cavern. They are surrounded by the skulls of their previous victims, and use them to attack. The skulls fire laser beams which, due to their numbers, can be difficult to dodge. It is better to destroy the skulls with Power Slash, which will stun the imp. The Black imp can also use the green and red imp's slap attack, but is actually pretty much defenseless without its skulls. Its health is superior to all the other Imp classes, but by the time it first appears, Amaterasu's equipment should be potent enough to destroy it.

In Ōkamiden, they are scarecrow-like demons made of several floating pieces. They attack by sending pieces of themselves at Chibiterasu. Sending back the thrown pieces with Power Slash will stun them (although this does not work if the head is the part which is thrown), or, more effectively, they can be hit with Power Slash and then abruptly pulled back into one whole piece by Magnetism, which stuns them. Although encountered late, they are not necessarily the most difficult Imps as they can be stunned rather easily. 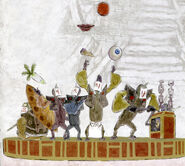 The Imps of the Moon Cave.