The Glaive is the third class of Divine Instrument used by Amaterasu and Chibiterasu in their journeys throughout Nippon. When equipped, it has the appearance of a large sword slung across the back, and spins in the air when swung.

All main attacks of the various Glaives are identical apart from appearance of the weapon itself and the damage output. Thus they are not the ideal choice for combating flying enemies; either swap to a different weapon or use the Celestial Brush to draw the target to the ground.

The Glaive is a hold-and-release weapon, but can also do a quick combo attack if necessary. In the PS2 version, hold square to charge up the Glaive, and then release it while near a foe to carry out a savage attack. In the Wii version, instead swing the Wii Remote upwards to charge, and downwards to release. The damage potential of an uncharged Glaive is lower and less frequent than an equivalent Reflector; only by charging will the full capabilities of this mighty weapon be released. This can make it a difficult weapon to use.

Amaterasu will stand up stationary while charging for a strike, although the charge can be made and held in any position, including while jumping. If the charge is released while in the air, Amaterasu will dive downwards, hitting foes beneath and occasionally delivering multiple hits in the same swing. The Glaive has a long range when compared to the Reflector, although not so long when compared to the Rosary; it may hit more than one enemy at once when at close range. It is possible to continue moving around the arena while charging the Glaive, which can be extremely useful for preparation of the mighty attack soon to follow.

Originally, the Glaive has a 2-hit combo, where the second hit is distinctively different and a little more powerful than the first. Training at the Dojo will enable Amaterasu to make a 3 or 4-hit combo with the Glaive. Additionally, all hits can be charged, and a combo can have any amount of charged strikes, giving the Glaive a wide range of devastating offensive options.

When used as a sub weapon, the Glaive is charged with a stationary stance in two levels; this charge can be transferred over to the main but not vice-versa. Also, the main and the sub can be charged simultaneously. The sub-Glaive has two varieties of attack. The first type is a powerful and widespread upward slash, with a dash added when charged to the second level; this attack is used when equipping Seven Strike or Eighth Wonder. The second type is a forward stab, becoming a powerful spiralling drill lunge when charged to the second level; this is used while Tsumugari, Blade of Kusanagi or Thunder Edge is equipped. When used in the air, regardless of the Glaive equipped, Amaterasu will stand on top of the blade as it delivers a devastating stab to the ground. She cannot make a double jump or evade while charging, so it is best to achieve the maximum height before beginning an attack. After the lunge, the blade of the Glaive will be stuck in the ground for a moment, exposing Amaterasu to enemy attacks.

Note that charging the Glaive as a sub weapon in the Wii port of Ōkami is done by pressing the Z and C buttons at the same time. It is yet unknown if it is possible to carry over this charge to the main weapon.

Both types of sub Glaive attacks can strike enemies multiple times. Finally, the sub weapon can deal a quick, additional finisher to the end of the main Glaive combo; by pressing circle/Z with timing, Amaterasu will do a fast swing with the sub. However, the timing must be correct to avoid barking or using Golden Fury and Brown Rage. Overall, the sub Glaive is a longer-ranged, but slower version of the main Glaive.

When the Dojo technique Sword Dance has been learned, when both of Amaterasu's main and sub weapons are Divine Instruments of the Glaive class, both blades will gain a significant damage boost and a faster charge time. This increases their usefulness and allows powerful damage to be dealt relatively quickly.

The first Glaive, Tsumugari, is not encountered in the game until after saving Kushi from Orochi in the Moon Cave and is the reborn form of the sacred sword Tsukuyomi, which was devoured by Orochi. Ninetails has Ninestrike, a dark copy of the Seven Strike Glaive, but its version has nine points and is of the same design as other "lightning rod" switches in the game, a clear indicator that Amaterasu should use Thunderstorm on it in order to stun Ninetails. Yami's fourth form also can form a copy of Ninestrike with its arms and Lechku & Nechku can summon it periodically.

The Blade of Kusanagi is one of the three Imperial Regalia of Japan. In real legend, it is the sword used by Susanoo Omikoto to slay Yamata no Orochi. Tsumugari is found the same way the Blade of Kusanagi was obtained by Susanoo. This reflects the relationship between the two swords, as Tsumugari is another name for the Blade of Kusanagi. Another name for Kusanagi is Ama no Murakumo, which appears later in the game as the Thunder Edge glaive in the English version. Kusanagi no Tsurugi means Grass Cutting Sword in Japanese. However, in ancient Japanese it translates into Snake-Sword. The Grass Cutting Sword name meaning is reflected in the game when Amaterasu charges up the glaive and hit the enemy. What appears to be small, shining blades of grass appear when it was done (if observed closely). Concept art of Glaives shows that the original version of Blade of Kusanagi apparently wields the ability to control and cast winds based on the description which says a "tornado" surrounds the blade.

Seven Strike is based on the Nanatsusaya no Tachi (or Chiljido in Korean), a Japanese national treasure that was originally made in the Korean kingdom of Baekje. Thunder Edge resembles Tsumugari, the Glaive obtained from True Orochi's present-day counterpart, Orochi; it is also similar to the Kusanagi, obtained from the defeat of Yamata-no-Orochi at Susanoo's hands in Shinto mythology. This reflects the relationship betwen the Tsumugari, Blade of Kusanagi and Thunder Edge, which are all based on the same sword (Ame no Murakumo no Tsurugi, more popularly known as the Kusanagi no Tsurugi).

Because a Glaive can be charged, it has a variable damage output of between 1 and 5 times its base damage per strike.

As with Solar Flare and Tundra Beads, Thunder Edge does not carry over to a New Game+. 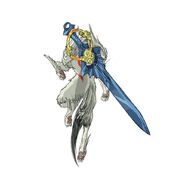 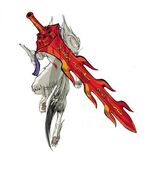 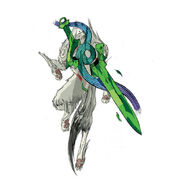 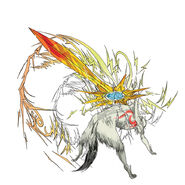 In Ōkamiden, Chibiterasu also acquires Glaives-however, the most notable change from the system in Ōkami is that the Tsumugari must be upgraded by a blacksmith to change its variation and increase its power. Upgrades are made available by giving the blacksmith Lucky Coins, and the upgrades must be purchased through the exchange of Demon Bones, Skins, and Livers obtained from Purifications. Unlike in Ōkami, only one Glaive can be available to equip at a time-and once upgraded, the lower-tiered Glaive cannot be obtained again.