Start a Wiki
Split suggested
It has been suggested that this article should be split into two or more different articles.

There are two characters in Ōkami referred to as Fisherman (「漁師」?; Ryōshi). One is encountered at Ryoshima Coast, near Ankoku Temple. The other is found on the dock of a small island, just off North Ryoshima Coast. Other fishermen include Kokari, Benkei and Urashima.

The Ryoshima Coast fisherman has a tanned complexion and black hair. On his back is a large, black tattoo of a classical wooden ship's wheel. He wears little in the way of clothing, only his crotch is covered by a blue seashell. He wears bandages on his forearms and shins. At his waist is a bag, almost as large as his head. The Fisherman has small eyes and a drooping brow.

The Fisherman found on North Ryoshima Coast looks quite similar to his southern coast counterpart. He has a tanned complexion a large, black tattoo of an anchor on his back. His crotch is covered by a starfish and he has a white bandana on his head. He wears bandages on his forearms and shins. On his hip is a large bag. almost as large as his head. The Fisherman has a stern expression and a large, red nose.

The tattoo on the Ryoshima Coast fisherman's back. 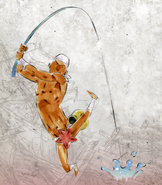 The North Ryoshima Coast fisherman.
Add a photo to this gallery

Retrieved from "https://okami.fandom.com/wiki/Fisherman?oldid=48056"
Community content is available under CC-BY-SA unless otherwise noted.