Evil Rao is the form assumed by Ninetails while under the disguise of priestess Rao. The demon wields Ninestrike, a sword that oddly seems like a dark version of Seven Strike. She can be fought again in the Kamui Devil gate trial cave.

A master of transformation, Evil Rao maintains Rao's appearance for most of her scheme. However, she changed Rao's appearance slightly: she let a lock of hair cover her right eye, as her true form is missing this eye and revealing it would also reveal her true identity. She also has a red bead necklace, as opposed to the real Rao's blue beads. When threatened, she assumes a combat form, a fusion of her human and demon forms. In this form she wears Ninetails' mask (or perhaps the mask is her face), but maintains Rao's clothing and body, albeit with a few alterations. She now has armguards and her outfit is sleeveless, with shoulder pads. On her waist is a black scabbard that holds a blade she is never shown to use. She carries a smaller version of Ninestrike on her back.

When Amaterasu and Issun arrived at Himiko's Palace to find her dead, Rao told them of a terrifying monster, ten times her own size, which broke through Himiko's protective barrier[citation needed]. The creature she spoke of was a the leader of the demons that had to be defeated to protect the people of Sei'an City. While Issun was still coming to terms with Himiko's death, Amaterasu stared intently at Rao and finally let out a ferocious growl. Issun and Rao both appeared to be confused by Amaterasu’s actions with Rao going as far to suggest that the wolf-goddess may be under curse. Amaterasu, nevertheless, lunged at Rao, only for the priestess to put her hands together and spoke a chant. Amaterasu reached Rao just as she finished her chant. She lifted her head to the wolf and revealed a bright, red eye.

Rao laughed at Issun's confusion, revealing that she had lead them to the Sunken Ship as bait for the Water Dragon. She expressed her surprise that Amaterasu had overcome every problem she encountered on Ryoshima Coast, including the taming of the Water Dragon. But with the Water Dragon gone, there was no way Amaterasu could reach Oni Island, the fortress that Rao now claimed was her own. She laughed and told the pair that her plans had been so easy once she had assumed the disguise of Rao's body and gotten close to the Queen. The woman they had once known as Rao had been revealed as an imposter.

"Rao" revealed that it was the power of the Fox Rods, the very item Amaterasu had retrieved for her, that allowed her to kill Himiko. The woman continued to mock Amaterasu, she said it was all thanks to her that the power of the Dark Lord had been revived. At this she span around in a puff of smoke and stopped to face Amaterasu, her face now replaced with a fox mask.

This new Evil Rao was revealed to be the Dark Lord herself. She swallowed Himiko's crystal ball to ensure that it would not be used to find her and challenged Amaterasu to battle, believing that with the sun goddess out of her way nothing could prevent her from creating a world of evil beings. It was then that Issun recalled King Wada’s vision of the real Rao’s death and finally understood the truth it held.

A fierce battle began between Evil Rao and Ameterasu. Amaterasu dodged every swing and thrust from Evil Rao's sword and eventually knocked her into one of the throne room's pillars, causing her to cough up Himiko’s crystal ball. Just as Amaterasu was about to strike the final blow, Evil Rao used her magic and stopped the wolf in her tracks. Nine balls of blue foxfire formed behind Evil Rao and she began to glow. Large tails of darkness began to grow from her back and she transformed into her true form.

The Dark Lord hurled a powerful fireball at Amaterasu, knocking her to the ground. Despite only using a small fraction of her power, Ninetails could not finish Amaterasu off. The size of the room restricted her from using her full power and so she fled in a bright light, returning to her fortress on Oni Island to rally her forces.

Rao fights in a similar style to Waka. She is very nimble and uses her sword to attack. She can also use a dive-bomb attack to strike from above. All of her attacks are close-combat, so it is best to attack from afar or very quickly to avoid her attacks. Rosaries are best for this. Her one long range attack is a sword throw. To perform this move she conjures up five swords and hurls them at Amaterasu. The swords can be knocked back at her with Power Slash, but doing so dealt her no damage. Exorcism Slips can also be used. The best time to attack is after she has performed a downward thrust. As soon as she hits the ground, she will be stunned and vulnerable to Power Slash. 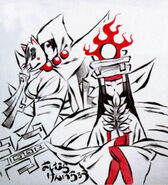 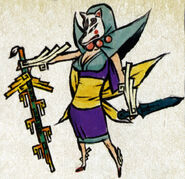 Evil Rao as seen in Ōkami.
Add a photo to this gallery

v · d · e
Enemies and bosses in Ōkami
Retrieved from "https://okami.fandom.com/wiki/Evil_Rao?oldid=48568"
Community content is available under CC-BY-SA unless otherwise noted.