The Dragonians are a underwater race of people who dwell in the Dragon Palace. They are especially known for their connection with the Water Dragon.

The Dragonians lived peacefully in their home, the Dragon Palace, under the rule of King Wada and Otohime. One day, Oni Island appeared in Ryoshima Coast, and many demons from the island attacked the palace. They did all they can to protect their home, but there were too many demons. King Wada, seeing the grave danger the palace was in, transformed into the Water Dragon with the Dragon Orb to protect his home and people.

As the Water Dragon, King Wada was able to defeat the demons until the Dark lord appeared. They both were locked in battle, fighting for three days and nights. King Wada eventually gave in to the Dark Lord, but not before ingesting the Fox Rods that he wielded. The Dark Instrument lodged in his stomach, driving him to madness. The Dark Lord retreated, leaving the Dragonians to deal with the crazed Water Dragon.

The Dragonians then did all they could to keep their home safe, despite the constant threat the Water Dragon poses for them. 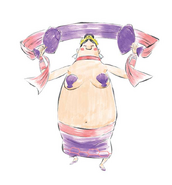 Add a photo to this gallery

Retrieved from "https://okami.fandom.com/wiki/Dragonian?oldid=48687"
Community content is available under CC-BY-SA unless otherwise noted.