These are alternate Ōkami soundtracks, comprising various re-released, remixes and revisions of the Ōkami Original Soundtrack.

Section incomplete
This section is empty or needs to be expanded. You can help the Ōkami Wiki by writing it. 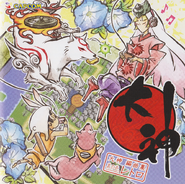 The front cover for Vol. 1 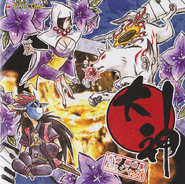 The front cover for Vol. 2 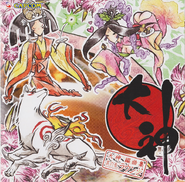 The front cover for Vol. 3 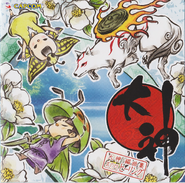 The front cover for Vol. 4
Add a photo to this gallery

A re-release of the original soundtrack with selected songs from the Capcom sound team, called the Ōkami Classics Soundtrack, was released along with the Japanese Wii version on October 15, 2009. This version contained 42 songs identical to the ones in the Ōkami Original Soundtrack, but in a different order, and one song from the Ōkami Piano Arrange, counting 43 in total.

Ōkami Piano Arrange was released on March 30, 2007. This soundtrack featured piano arrangements of 10 songs from the Ōkami Original Soundtrack and was both arranged and performed by Mika Matsura.

Ōkami Tone of The QuintupleEdit

Ōkami Tone of The Quintuple, was released alongside Ōkami HD on October 31, 2012, that featured original instrumental versions of songs from the Ōkami Original Soundtrack. The name "Quintuple" refers to the five different instruments used in every song: the shamisen, cello, violin, piano, and shakuhachi. Totaling twelve songs, this soundtrack was the only one distributed by Sony Music Entertainment instead of Capcom. According to the official description of the product,[1] this soundtrack's cover features designs from the first illustration of Ōkami ever submitted to the Capcom Design Office.

Retrieved from "https://okami.fandom.com/wiki/%C5%8Ckami_soundtracks?oldid=47028"
Community content is available under CC-BY-SA unless otherwise noted.